Much ado about not very much – the Croxley Rail Link

When I worked at Watford (Met), then an impressively little-used station, I was brought into fairly close proximity with the Croxley Green branch, then just about still open but looking as though it wasn’t. Croxley Green station was on a main road but didn’t really serve anything very much, particularly given location of Croxley (Met). Anyone wanting Watford town would probably get a bus and for anywhere else rail travel involved an unattractive change of trains at Watford High Street. In consequence Croxley Green was even more impressively bereft of passengers and Chris Green painting all the lamposts red wasn’t the answer.

I had heard of the proposal to bolt these two not-really-very-useful-but expensive-to-run branches together and failed to understand why this would do more than produce one combined money-losing line. Who, I thought, would conceivably want to meander into London on the Metropolitan from Watford Junction, a journey of about 42 Minutes to Euston Square on a semi-fast train when one can get a main line train that will do the journey in 21-24 minutes? Much the same might be said of journeys to intermediate locations, for both Wembley and Harrow are served by both railways and again the service is faster by main line. A Watford-Northwood service might create a brief, and very slight, flurry of interest but buses would be as quick.

Of course, when I came to look into all this more closely I found that nobody was expecting much London-bound traffic to come this way. The whole scheme as it has finally emerged is promoted by Hertfordshire interests to promote local travel. The fragile business case is underpinned by the combined interests of Hertfordshire County Council and Watford and Three Rivers Councils (the Metropolitan Line from Moor Park to Watford being in Hertfordshire and outside the vested interests of Londoners).

The earliest proposal I have myself encountered for linking these two railways dates back to 1934, less than 10 years after the Metropolitan and LNER station opened. It has been looked at periodically as a possible good idea. In recent times it had an airing in 1968 when the London Transport and British Rail Railway Planning Working Party looked at it. Though quite cheap by comparison with other railway improvement schemes the benefits would ‘at best, only be marginal’. At this time we must recall that London Transport’s statutory area included Watford.

The 1974 London Rail study concluded that the scheme should at least be looked at. This was now slightly more complicated in that Hertfordshire (with Watford) was now outside the London Transport area, which was confined to the area of the Greater London Council and outside which the existing Underground services were becoming an ‘issue’, never mind new ones. Nevertheless an assessment was made and was thought to cost £4.75 million allowing for sale of land at Watford (Metropolitan).

The proposal again was felt undesirable and it was noted that though Watford (Met) traffic was relatively low some 60% of existing users would have a longer walk to a replacement station and therefore have longer journeys. The overall financial case was negative, the benefits marginal and there were operational concerns about interworking at Watford Junction.

By 1990 (during a period when London Transport was under government control and not tied to Greater London) the matter was being looked at again, this time with encouragement from the local authorities. A basic scheme was costed at about £10 million assuming Watford (Met) could be sold for housing. If Watford (Met) was retained. The cost would be nearer £17½ million if Watford were retained, including an amount for extra operating costs.

It is on the basis of the above work that the present scheme emerged. London Underground was a little lukewarm as there were few significant benefits to be gained, but Hertfordshire reckoned on a local case being made and it is on this basis that the scheme very slowly moved forward. 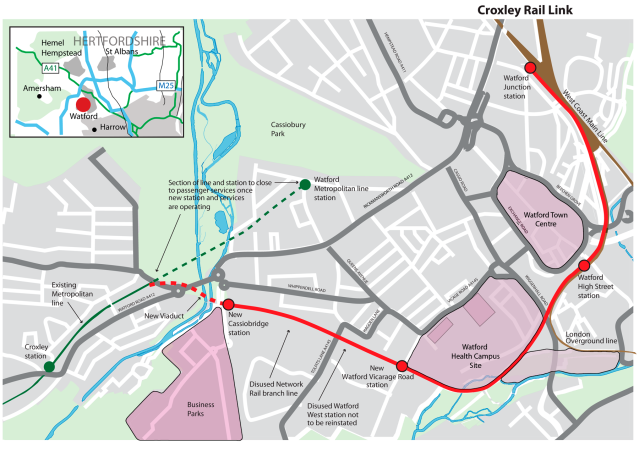 The Transport & Works Act Order was made on 28th July 2013 in favour of Hertfordshire County Council but somehow the project quickly got out of control and by agreement with the Mayor for London delivery of the project was taken over by TfL.

It is still plausible that in due course local benefits from a Hertfordshire point of view could be enhanced by revisting the Watford Junction – Rickmansworth option (this does not seem to have featured in Hertfordshire thinking). One option that I have not had sight of is that of an improved link between Watford and Amersham and Aylesbury (or beyond). It would be interesting to see what demand there might be for people switching from car and no significant new infrastructure would be required. Chiltern might be interested, I wonder if they have looked at it?

I thought it might be quite interesting to undertake an inspection of the existing line to see what is left, and the findings are set out below. 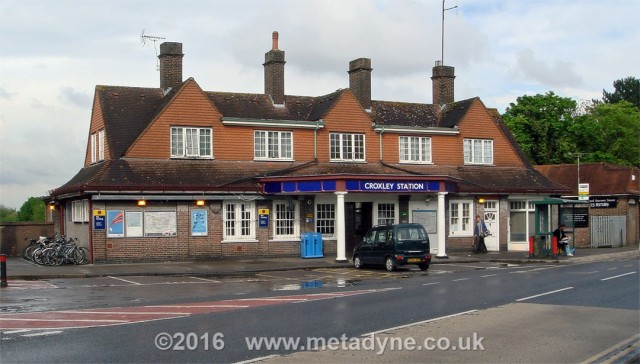 The route starts at Croxley (Metropolitan) station. Significantly, this is located on the Rickmansworth Road and is passed by fairly frequent buses to Rickmansworth, Watford town centre and Watford Junction. A Met passenger actually wanting Watford would always have been well advised to consider alighting here and getting a bus rather than continuing to Watford (Met), especially since there is no longer any bus service at that station. The existing buses will presumably compete with the rail link, at least in part, and this will perhaps have unwanted consequences. The buses also serve Watford General hospital, an important traffic objective. Perhaps there is an issue here with differing London and Hertfordshire fare and ticketing systems, and lack of local control of bus services, that would have been cheaper than the rail link. The advantage of the rail link will be speed, of course. The existing buses are scheduled at about 24 minutes from Watford Junction to Croxley while the rail link will be about half that. 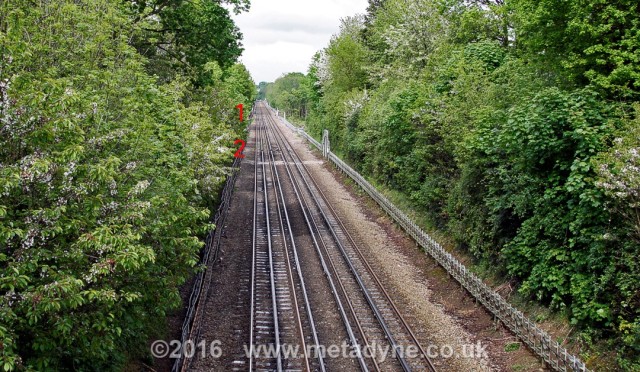 This is the view from Winton Approach, the first overbridge north of Croxley, looking north. The line crosses Baldwins Lane at the point where the figure 1 may be seen, but the branch onto the new connecting viaduct is closer than that, near where the figure 2 is seen (though this is hard to imagine). The point of deviation is defined as 128 metres north of this bridge.

This diagram shows the general arrangement. The Metropolitan line runs from bottom left to top right while the former Croxley Green route (hatched) starts lower centre and runs right. The Croxley Rail Link may be seen near centre of diagram branching off from the Metropolitan, passing to north-west of Baldwins Lane roundabout and joining old Croxley Green branch in bottom right hand corner, at a bridge across Ascot Road. Winton Approach (from where previous photo was taken) is at extreme bottom left corner. 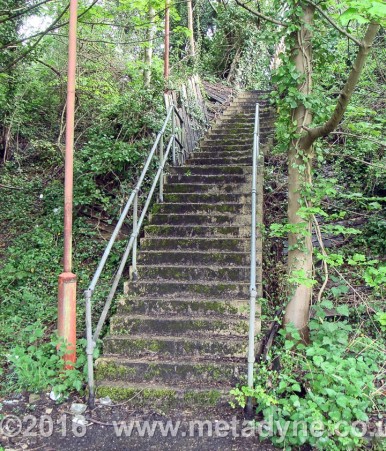 These steps, and the lamps, still in Network SouthEast colours, are virtually all that is left of Croxley Green station where the platform was at the top of an embankment. The site does not form part of the new route. Much might be said about this place, but there is no point in repeating here information that is well presented on another website and I do recommend a look (it may be found HERE). 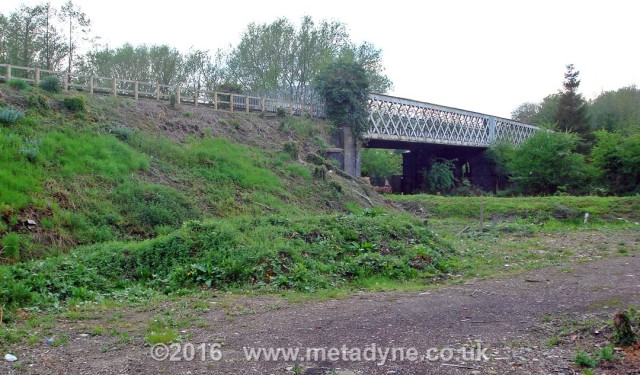 The Watford end of Croxley Green platforms stopped on the embankment at the right hand end of this photo and trains used to run straight onto this bridge, which crosses the River Gade and Grand Union Canal (the bridge carried two tracks, one acting as engine run-round and goods reception road). This bridge is not part of the rail link scheme and its future appears undetermined though it will be a maintenance liability for somebody). The embankment to the left of this image (out of shot) has been cut through to make a roadway, leaving the bridge quite detached.

This is New Ascot Road, a kind of by-pass, which punctuated (and therefore closed) the railway. The embankment on the Watford side of the gap is visible above the blue car with a bridge across an older road beyond (the original Ascot Road). The Rail Link approaches the old route from this side and joins it more of less where the surviving bridge is located. A new station (to have been called Ascot Road but now possibly Cassiobury or some variation on it) will be built on the new link line immediately before it joins old route. 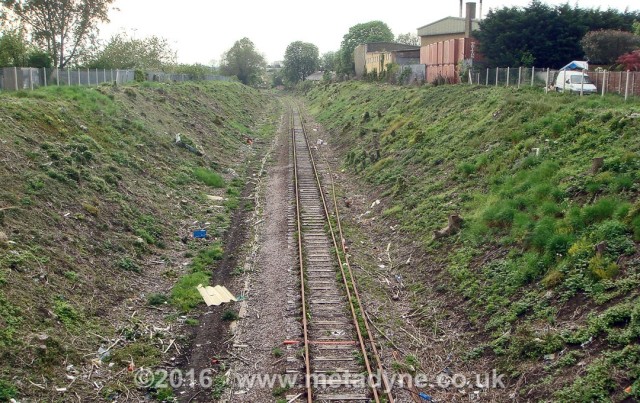 This is looking towards Ascot Road (just beyond where line curves to left in distance) from the Tolpits Lane bridge. The bull-head track is still complete but for some reason the conductor rail is displaced. It is apparent the formation is wide enough for a double track, though only one was ever laid. 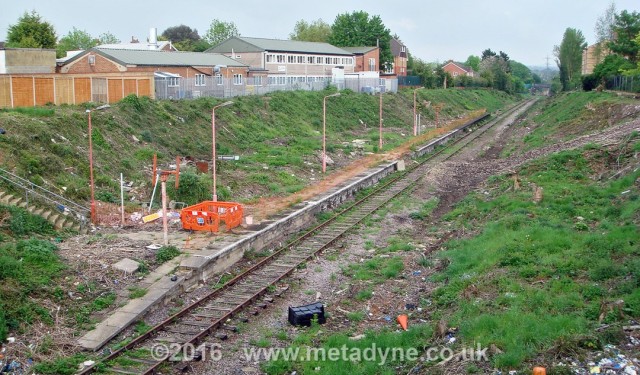 Looking the other way from Tolpits Lane (looking east) may be found the decaying remains of Watford West station, and again the Network SouthEast lamp standards are the only things that seem to have survived in recogizable form. This is another station where an excellent illustrated historical overview is available, and may be found HERE. 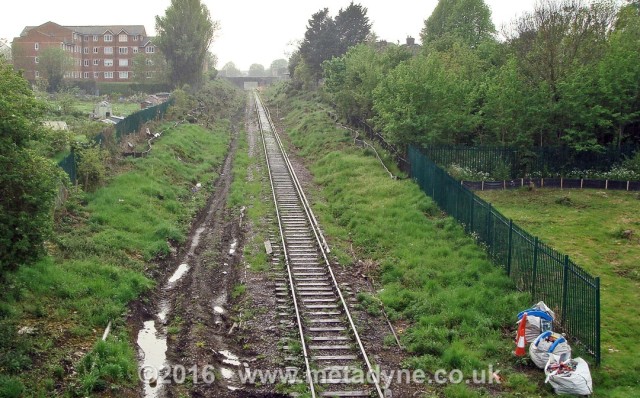 The next bridge eastwards is Vicarage Road and the above view looks back towards the site of Watford West. It is a good moment to explain that when these photos were taken no work had started on the Rail Link but major vegetation clearance had been undertaken involving some large plant (hence the tyre tracks). A new station is to be erected on this side of this bridge, to be called Watford Hospital or possibly Vicarage Road (but see below). 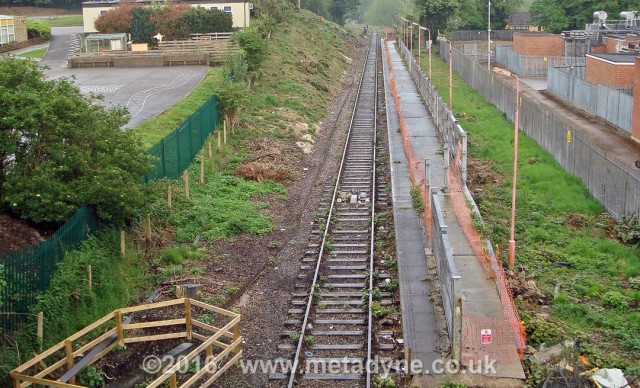 On the east side of Vicarage Road bridge is the short-lived Watford Stadium station, paid for largely by The Football Trust and thought last to have been used in 1993. The entrance had been via a footpath at the far end. This station location is much closer to both the football club and the enormous hospital than the new station that is to be built (see above entry) which will be a tidy walk away. This seems unfortunate. Just beyond the end of this long platform where the line curves left had been the junction with the former Rickmansworth branch, which came in from the right. 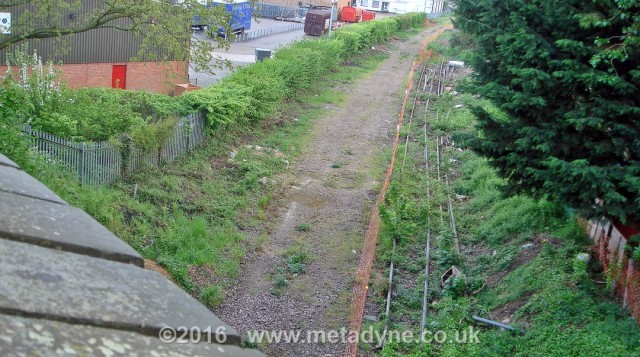 This view (looking south-west) is from the Wiggenhall Road bridge before the Rickmansworth and Croxley Green lines bifurcate. 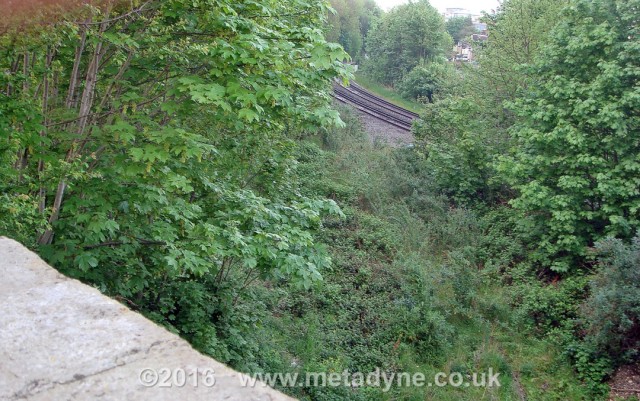 And finally, from the Watford side of the Wiggenhall Road bridge we see the old route where it joined the Euston-Watford line and where Rail Link will reinstate a junction.

Work is expected to start shortly and it should be complete by 2020.

I have always lived in London and taken a great interest in its history and ongoing development. This extended into the history of its transport services, about which I have written a number of books - I have spent most of my working life working in the industry and observing changes from within, mostly to the good, but not always so. I continue to write, and have a website with half finished stuff in it so that it is at least available, if not complete. Several new books are in hand. I have many 'works in progress' and some of these can be found on my website; the we address is http://www.metadyne.co.uk
View all posts by machorne →
This entry was posted in Uncategorized. Bookmark the permalink.