A Line to Nowhere

There is something a bit eerie about a railway line that was only partly built. Such is the case at the distinctly eerie Chessington South station which I have had cause to visit several times quite recently.

There hadn’t been much in the Chessington hinterland to attract railways in their first century of existence as fully integrated passenger-carrying systems. The good old Southern Railway (like the London underground railways) was very sensitive to the possibilities of house construction where there were decent transport facilities, the commuters created thereby committing themselves to paying for the railway through their season tickets to town, to which they and their families became absolutely committed. I must not call them commuters since the term had not been coined in this Country before the Second World War.

This had been a good-looking building but the explosion of gawdy signs, camera and aerials, and that machine thing, have succeeded in ruining the appearance of the place and making it all look a bit seedy.

The Southern determined that Tolworth, Chessington and the empty farmland to its south along the Leatherhead Road was prime Southern house-building land that could one day create a useful income. A plan was hatched for a new through line from Motspur Park to Leatherhead, to an extent paralleling the existing route via Epsom but serving areas too far away from the existing catchments, Parliamentary authority being obtained in 1930. When this ‘nice to have’ was expected to have been built I am not sure, the circumstances of what actually happened changed things.

1:2500 map. The single track south of the bridge over the unclassified road was not there long and seems to have been built to aid construction of embankment.

In the difficult times of the early-mid 1930s the government was still amenable to assisting useful public works that helped reduce unemployment and stimulated British business, but in all cases stopping short of providing liquid cash and with a disinclination to stimulate schemes that would happen anyway since this was regarded as mere subsidy (and a poor use of public money). London Transport and the main line railways established a workable mechanism to raise ‘cheap’ government-backed money and a number of schemes were examined, including London-Portsmouth electrification, which was quite expensive. However the programme as finally evolved confined these new works to the London Passenger Transport Area and the government indicated that it would consider a similar scheme for new railway works outside London. This set the scene for several quite well known improvements. In addition to London-Portsmouth there was to be included the Manchester-Sheffield-Wath electrification and the reconstruction of Euston station, for example. Making a start with the Motspur Park – Chessington – Leatherhead line would also receive assistance. The mechanism was to establish a public corporation (the Railway Finance Corporation) which could issue bonds that were backed by a government guarantee and against the proceeds of which the railways could draw down cash for approved schemes as required (paying the same rate of interest as the bonds required to be paid).

The Southern did not regard the new line as the highest priority and expected to construct it in stages, each stage stimulating ever further development south. Stations were planned at: Malden Manor (the name Old Malden was toyed with), Tolworth, Chessington Court, Chessington Grange, Malden Rushett and a final station serving the  area between West Ashstead and North Leatherhead and the whole of the line was to be 7¼ miles. We cannot be certain about the planned name for the southernmost station but Leatherhead Common would not have been inappropriate. Whilst the names Moor Lane (Chessington) and Garrison Lane (Chessington) were used to describe the two stations in Chessington in 1935 it is unlikely these were firm proposals. Indeed the first of these two was built at a site slightly further south and did not serve Moor Lane.

The line opened as far as Tolworth on 29 May 1938 and to Chessington South on 28 May 1939, the whole section being 3¾ miles long. The alteration in station names from Chessington Court to Chessington North, and Chessington Grange to Chessington South, happened quite shortly before opening; the new names are rather less romantic and less estate agent friendly perhaps, but were probably considered more helpful for those not familiar with the area. Planned cost for this section was just £440,000 but I do not have to hand actual costs, though they would not have been so very different. Some work was done further south and much of the land purchased and pegged out but the war put paid to major work being done and afterwards the settling of the green belt meant that housing development was impossible and there was no point in extending the line. Track continued as far as Chalky Lane, having transferred from cutting to embankment, and work was done on an embankment to the south as far as Chessington Wood, apparently by the Royal Engineers as an exercise. The provisional edition 1:25,000 Ordnance Survey maps shows this complete, with track and a bridge over Chalky Lane, but personal inspection suggests no bridge was finished and the existence of track south of Chalky Lane unlikely.

Chessington South (looking north) with terminal platform on right and never used platform on left. The overhead blue panel this side of canopy is a knock-out panel that would give access to the footbridge, when built.

View of the derelict platform, in reasonably good condition given when it was built and the improbability of much maintenance.

The civil engineering works were greatly complicated by the nature of the undulating land and the unforgiving nature of the acidic and treacherous clay which required considerable under-track support and extensive drainage and special treatment of the higher embankments which required topping with dry material.

Looking south from Chessington South. This track is fully signalled for shunting moves and seems to be fully electrified

Extensive use was made of concrete, a favoured material of the Southern. It was suggested in 1935 that the stations would have island platforms and it is likely that the overall style was expected to follow that of the recently-completed Wimbledon & Sutton Line. In fact the completed stations were of a distinctive modern type with side platforms that, unusually, employed cantilevered concrete canopies of the Chisarc design which were heavily reinforced but actually quite thin and light for the job required. These had porthole-like glazed openings in the soffits to allow a proportion of daylight through and the stations were amongst the earliest to employ fluorescent lights. 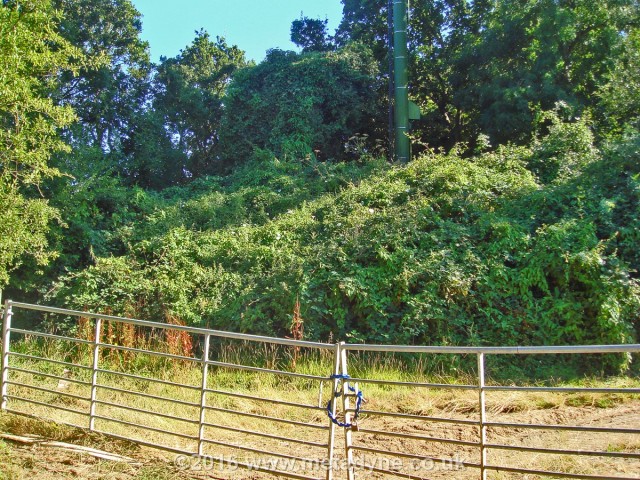 View from Chalky Lane looking at what is clearly an embankment leading from its south side. Careful examination fails to reveal any evidence that a permanent bridge was completed here. A corresponding embankment on the north side is near where the track from Chessington South used to end.

This aerial view from 1948 (looking east) shows Chalky Lane on the left and railway near top running left-right (reading away from Chessington South). Just visible is a light, temporary bridge with wooden trestle props over Chalky Lane and though not obvious at this size track can be made out over the bridge and running all the way along this embankment. This corresponds with the map shown above. (Britain from above EAW013206)

Chessington South was never designed as a terminal station and was constructed with two complete platforms in the same manner as the others, though modified for access from a station building at a higher level (all the other stations have the station building lower). It is clear that to get the station open as quickly as possible some unnecessary work was deferred, such as the footbridge to the ‘up’ platform which was not required until the line went further south. The line continued south to give access to a goods yard (there was another at Tolworth). By the way, all four stations were rather similar in appearance and presented to view a great deal of then-fashionable concrete; whilst the two northern stations had all-concrete ticket halls, for some reason the two Chessington stations were finished off with brick-built ticket halls. 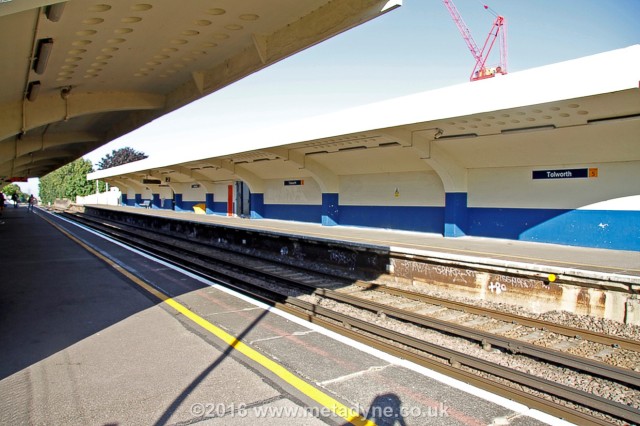 Tolworth station has survived well and the concrete doesn’t seem to have spalled or degraded (unlike some Underground stations). The porthole lights have unfortunately long been painted over, which seems regrettable. Some mastermind at South West Trains has decided that each of these three near-identical stations will also be painted identically so unless one’s train window pulls up opposite one of the few signs you have no idea where you are! I think I would have painted them each slightly differently (or put more signs up).

It is a pity about the awful signage clutter (surely SWT doesn’t encourage this?) but the station has survived reasonably well. The  once-fine ticket hall interior is a bit grim now, but no more than other stations where staff and facilities have been pared down. 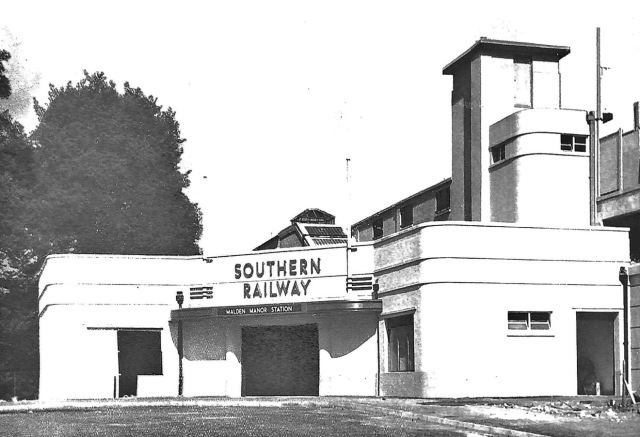 This is Malden Manor station as opened, a very similar station to Tolworth. It may be seen that these two stations originally had a parapet around the top of the flat roof, making space for the Southern Railway signage which presumably disappeared with the parapets. These stations were designed by Architect James Robb Scott and make a pleasing contrast with Charles Holden’s vast station boxes.

Unusually the goods yard at Tolworth is still in use having been adapted to fill trains with (I think) gravel, locally obtained and fed to the yard by a conveyor system. Each time I have been past I’ve seen a train lurking so business is presumably good. The sidings at Chessington South appear quite unusable but the signalling suggest they are still avilable in theory.

The track in the unused ‘up’ platform at Chessington South is still bullhead rail on wooden sleepers, the rails are still connected with 2-hole fishplates (why would anyone not want to use the more robust 4-hole versions?) that are known to have been used in 1938-9 and it looks  as though this is all the original track, now over 75-year old.

It is of note that almost the whole of the branch parallels a main road which carries a TfL Chessington-Leatherhead bus mostly at half hour frequencies, and the ones I have seen are certainly not heavily occupied (at least, not beyond the zoo). It is probably as well the southern section wasn’t built. The line, particularly north of Chessington North, seems reasonably well used though.

This view from June 1949 looks north-east. At (1) is Chessington North station, (2) Chessington South station, (3) Chessington South goods yard, and (4) buffer stops and the limit at which track is visible, the track to the south apparently having just been lifted. The block of temporary buildings between railway and main road are Ordnance Survey offices. Chalky Lane is a little to the right, out of shot. (Britain from Above EAW023696)

I have always lived in London and taken a great interest in its history and ongoing development. This extended into the history of its transport services, about which I have written a number of books - I have spent most of my working life working in the industry and observing changes from within, mostly to the good, but not always so. I continue to write, and have a website with half finished stuff in it so that it is at least available, if not complete. Several new books are in hand. I have many 'works in progress' and some of these can be found on my website; the we address is http://www.metadyne.co.uk
View all posts by machorne →
This entry was posted in London Rail, Main Line Rail and tagged Chessington Branch. Bookmark the permalink.

3 Responses to A Line to Nowhere